The 2023 Nissan Ariya, the automaker’s upcoming electric crossover SUV, finally has a sticker price. The company announced that the EV will start at $47,125, and that reservations are now being accepted.

Nissan is expanding its line of electric vehicles with the 2023 Ariya SUV, which will go on sale in the U.S. in fall 2022. The Ariya will join the Leaf hatchback in the Nissan showroom and will offer up to 300 miles of driving range, which beats the Leaf’s maximum of 226. Ariya’s design represents a shift from the current sharp, angular lines seen on many of Nissan’s vehicles. The low, wide stance of the Ariya differentiates it from the Rogue and gives it a sportier look. Two different battery sizes will be offered—a 63.0-kWh battery is standard, and a larger 87.0-kWh pack is optional—as well as either front- or all-wheel drive. A host of driver-assistance features, infotainment tech, and convenience items will be included here, helping the 2022 Ariya compete with similarly sized EV crossovers, such as the Tesla Model Y and Hyundai Kona Electric.

The Ariya is an all-new vehicle for Nissan. It features Nissan’s new semi-autonomous driving system (ProPilot 2.0), which debuted on the Japanese-market Nissan Skyline sedan. The Ariya is said to deliver up to 300 miles of driving range, but only when equipped with the optional dual-front/rear-motor drive configuration and the larger 87.0-kWh battery pack. 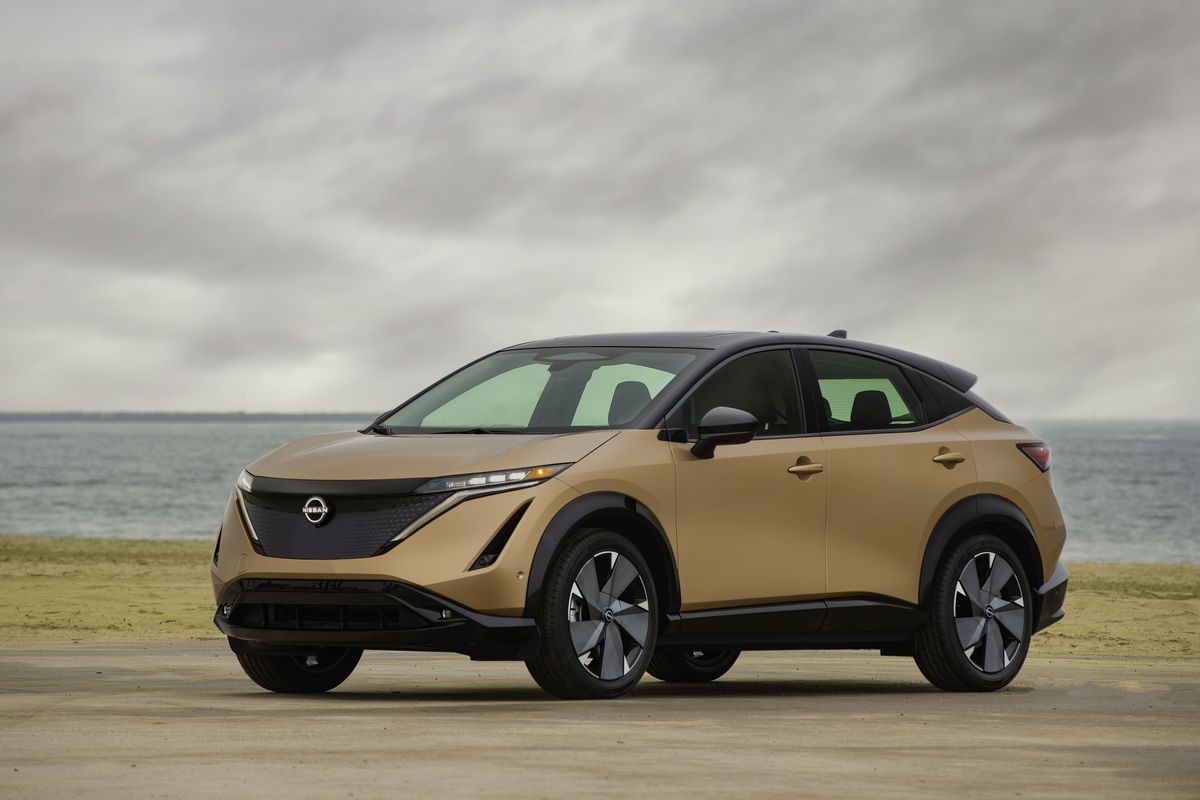 Unlike the Leaf, which comes only with front-wheel drive, Nissan is pulling from features developed in other cars, including the GT-R sports car’s torque-split system, to offer optional all-wheel drive via a dual-front/rear-electric-motor configuration. We estimate that the all-wheel-drive Ariya will zip from zero to 60 mph in less than 5.0 seconds, a feat that is similar to higher-end electric vehicles. The base front-wheel-drive model will likely be slower, but we still expect it to offer peppy acceleration that’s a characteristic of EV powertrains. 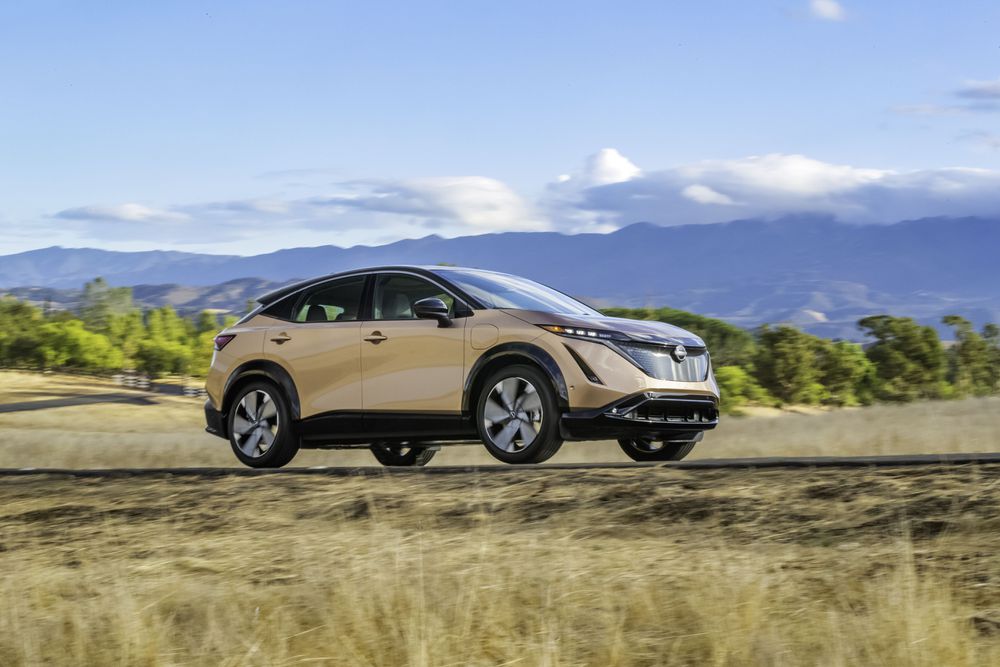 Nissan says the Venture+ offers up to 300 miles of driving range per charge, which is quite the step up from the Leaf’s maximum range of 226 miles. The Evolve+ and Premiere models offer up to 285 miles per charge and the top-spec Platinum+ is supposedly good for up to 265. Similarly sized vehicles include Jaguar’s I-Pace and Audi’s E-Tron, which have 234 and 204 miles of range, respectively. Key rivals from Tesla offer claimed ranges of over 300 miles. The Ariya will be capable of charging at home on 110- or 240-volt outlets as well as at public charging stations and even DC fast-charging ports.

EPA fuel economy estimates aren’t yet available for the Ariya, nor has Nissan released any claimed MPGe figures. When the Ariya gets closer to launch, that information will likely be available. We also hope to test the Ariya ourselves on our 200-mile highway route, which allows us to evaluate its real-world efficiency. For more information about Ariya’s fuel economy, visit the EPA’s website.

Ariya’s interior looks futuristic and minimal. Nissan appears to have discarded every button possible in pursuit of a smooth dashboard that favors a sleek look to match the design of the exterior. Despite Nissan’s claim that the Ariya’s cabin is unlike a traditional automotive interior, its minimalistic theme appears to be its sole unique trait. Not that the cabin doesn’t look like a nice place to spend time. A flat, low floor – to increase the spacious feeling inside, and Nissan has incorporated comfy zero-gravity seats into the design.

The dual 12.3-inch displays serve as both the digital gauge cluster and the infotainment screen. Apple CarPlay, Android Auto, and in-dash navigation should all be standard features. Ariya concept shown in 2019 showcased a feature allowing the car to sync with the schedule of the driver, so it can pre-heat or pre-cool the interior while it’s parked and charging, and therefore not draw on the power from the battery. The concept also showed off technology that would allow the driver to use their phone to park the Ariya automatically from a nearby location using ProPilot’s Remote Park, a system similar to Tesla’s Smart Summon feature. Nissan hasn’t said yet if these features will make it to the production model.

The Ariya will feature ProPilot 2.0, Nissan’s second generation of the ProPilot semi-autonomous technology, as an optional feature. The system allows drivers to remove their hands from the wheel in certain driving scenarios. For more information about Ariya’s crash-test results, visit the National Highway Traffic Safety Administration (NHTSA) and Insurance Institute for Highway Safety (IIHS) websites. Key safety features include:

Ariya is a cornerstone to the Nissan NEXT global transformation plan and is the first production model to represent the company’s new electrified brand identity. Nissan has announced a target that more than 40 percent of its U.S. vehicle sales by 2030 will be fully electric, with even more to be electrified.

Like the majority of the auto industry, Nissan has promised to make and sell more electric vehicles. Hence, the company is targeting that more than 40 percent of its US vehicle sales by 2030 will be fully electric. With even more to be electrified (meaning hybrids and plug-in hybrids).

Self-Driving Cars – What’s Keeping Them Still Away From Your Roads?

You are almost there!
JOIN 107,565 IT DECISION MAKERS FOR FREE.
Go Back
Already have an account? Sign In
Welcome to TechVersions!
READ WHAT 107,565+ IT DECISION MAKERS READ EVERY DAY.
Forgot your password? Get help
FORGOT YOUR PASSWORD?
We'll help you get it back in a jiffy! Simply enter your business e-mail address associated with your account and we'll e-mail you the link to reset your password.
A password will be e-mailed to you.